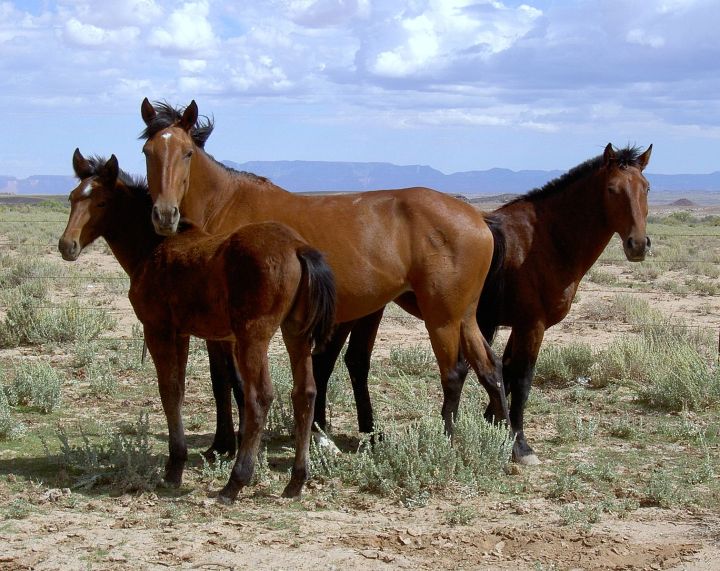 The word “gather” sounds like such a gentle word, like gathering wildflowers on a spring day. But for wild horses, as in the “Muddy Creek Wild Horse Gather Plan EA,” it’s meaning is anything but gentle. It hides a brutal reality – being herded by helicopter, then being sent off to holding pens where they are likely to spend the rest of their lives in captivity. In the blink of an eye, lost to each of these horses is their freedom, their family, and their wild way of life. This is like taking a bird from the sky and keeping it in a cage.

The Muddy Creek Herd Management Area in Emery County, Utah – 283,000 acres of public and state land – lies in the San Rafael Swell –- a juniper/pinion area of spectacular rock formations.  The “Gather” Plan, proposed by the BLM for the San Rafael Swell would remove “excess” horses and also carry out fertility “treatments” (another of those euphemistic words) to prevent the remaining wild horses from breeding. These “treatments” are intrusive, have to be repeated every year, and are harmful to the lives and the social order of the horses and their relationships to each other. Some horses will be removed and put up for “adoption.” We’ll come back to “adoption” in a moment.

Utah wild horse land to be used for oil and gas?

One might ask, if there is not enough land to support the horses – indeed, so little land that some of the horses have to be removed from the wild and those remaining prevented from having offspring – then how can there be enough land for oil and gas development? Apparently, there is a lot of land for oil and gas, but not enough for the wild horses.

As is the case all over the west, there is fierce competition for the use of state and public land between wild horses and business interests, whether they be oil, gas, or other mining or ranching interests.

The San Rafael Swell is also an increasingly popular tourist area. But the tourists, like the horses, seem to be left standing out in the cold.

Please find the link below, at the end of part two, to read the BLM press release calling for comments on the Muddy Creek Wild Horse Gather.

The BLM is requesting comments before May 20, 2018, on the Muddy Creek Wild Horse Gather Plan EA. You may send your comment to blm_ut_pr_whb@blm.gov

A threat to the survival of American wild horses

There is another serious threat to the survival of wild horses.  In April, the BLM submitted a proposal that the number of wild horses running free should be severely curbed to 27,000 wild horses in total, and that the surplus, as well as the tens of thousands who are already being kept permanently in holding pens, should be sent to slaughter. Most Americans are horrified by the concept of slaughtering horses; this is against the will of the American public.

The House Interior Appropriations Subcommittee has since passed the 2019 spending bill on to the full Committee, without authorizing the slaughter of horses; however, this does not mean that the horses are out of danger – further changes may be made, and provisions may be slipped in which would result in the slaughter of horses and increased horse roundups to deprive horses of their freedom. Every year there is re-newed pressure to allow the slaughter of wild horses and/or to drive them off the land.

You may send your comment about this to your representatives in Congress.

The Wild Free-Roaming Horses and Burros act of 1971

The Act, passed by Congress in 1971, begins with these words:

“Congress finds and declares that wild free-roaming horses and burros are living symbols of the historic and pioneer spirit of the West; that they contribute to the diversity of life forms within the Nation and enrich the lives of the American people; and that these horses and burros are fast disappearing from the American scene. It is the policy of Congress that wild free-roaming horses and burros shall be protected from capture, branding, harassment, or death; and to accomplish this they are to be considered in the area where presently found, as an integral part of the natural system of the public lands.”

Nearly fifty years later – sadly, this Act, with such noble intentions, has been contravened and undermined at every turn over the decades since its passing. Many of the Herd Management Areas set aside for wild horses have been shrunken, disappeared altogether, or taken over by cattle grazing. Horses, meant to be protected by law, have been systematically deprived of access to water, of their land, their freedom, and even their lives. 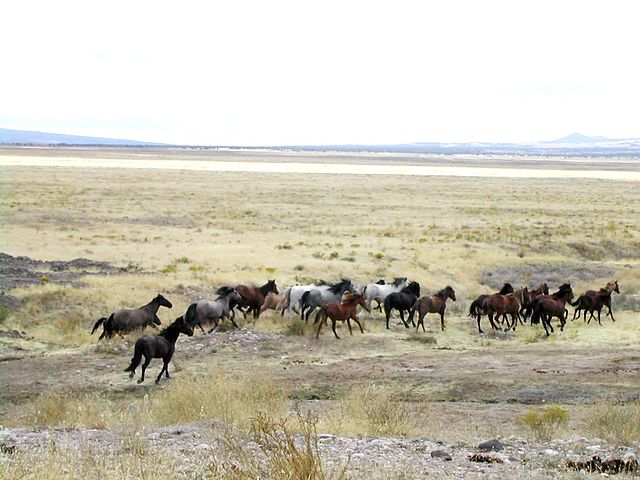 There is a popular fiction that most captured wild horses are “adopted” by the public – another of those words that obscures reality. Only a small percentage of these displaced animals are ever, in fact, adopted.

A lucky few may be adopted and well-treated by a kind owner, but even for these few, domestication will never replace their wild days, spent with their own families, racing in the wind up the hillsides and through the streams of the open country where they were born. That way of life will be forever lost to them. Around 45,000 rounded-up wild horses are now being confined permanently in holding pens across the west.

What is an “excess” wild horse?  Horses now occupy less than half the land they were allotted by the Wild Horse and Burro Act of 1971.  Many herds have been zeroed out entirely, and others have been greatly diminished. Yet the march towards eliminating them entirely continues.

The Daily Pitch Fork gives 2014 statistics, quoting BLM sources: There were 56,000 wild horses on BLM and US Forest Service land – and 2.1 million cattle. In other words, on the 250 million acres where grazing is allowed, 97% is used by cattle and 3% is used by wild horses. Yet cattle are a commercial business interest that can be grazed on private land; they are not native wildlife.

2 thoughts on “The plight of wild horses, part one”